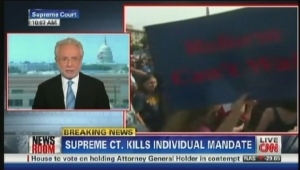 By now, almost everyone has heard about the big “goofs” on CNN and Fox News today. And no, I don’t mean Wolf Blitzer and Bill O’Reilly.

Erroneously broadcasting what the Supreme Court ruled did not happen only because CNN and Fox raced to be first with the decision. It happened because the people “reporting” the decision probably shouldn’t have been in that position.

Repeatedly CNN’s reporters and anchor referred to getting the news from a “producer” inside the Supreme Court. I have to wonder about that producer’s background. Was that person REALLY the best person to do the job? Anyone who has taken a law class knows that summarizing a Supreme Court decision is rarely — if ever — easy. One cannot simply read or listen to a few graphs on the first page (or even pages) and grasp the answer. Yet it is difficult not to think that that is precisely what CNN and Fox News did today when covering today’s court decision. We need journalists who are educated and know how to cover their beats. J-School 101: It’s more important to be right that first. You would never see NPR’s Nina Totenberg making this mistake.

I’m not blaming the producer(s) for this either. They probably shouldn’t have been there to begin with, but that’s not their call. I blame a pervasive media system in which the bottom line financially trumps everything, including getting the story right. Experienced, qualified reporters who would not make this mistake cost money. And they may not know social media like Twitter. But they would have gotten the story right and saved companies embarrassment.

I would like to believe that newspapers would not have made a mistake like this. (Yes, I know about Dewey vs. Truman.) When CNN got it wrong, I turned to nytimes.com and got accurate information. Newspapers are more likely to have beat reporters who understand how to cover their stories. With all the job cuts newspapers have faced, there can’t possibly be as many beat reporters as there once were. But at least there are some.

We need good journalists. Period. The CNN/Fox News “mistake” is only a small preview of what’s to come if we as a culture don’t start valuing journalism. 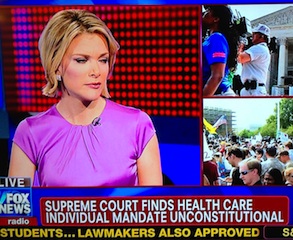